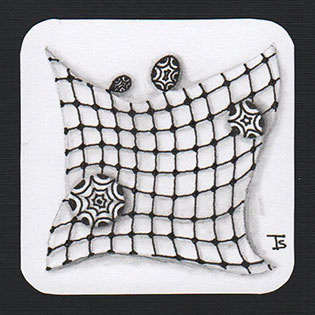 I have taken a lot of time off from traditional tangling. Basically, since the beginning of 2019. Sometimes, you need to take a break to evaluate where you have been… and where you are going. Sometimes, roads take off in unexpected direction. Sometimes we set off the road entirely to explore new territory.

And then the roads, the paths, the discoveries come around to a new understanding of where you were before.

I came home this morning from a meeting with another adventuring soul. I pulled out this little, card stock tile. I had intended to just draw the Printemps tangle. But I picked up my pencil (instead of the pen) without looking.

Hmmm. Well, then I should use it to draw a string.

I didn’t feel that Printemps would fit well in either the center or the drop-shaped spaces. It just didn’t want to go on the tile at all.

As I looked at the tiny, Bijou-sized tile, Crescent Moon sashayed into the moment and poked itself into the droplets, even the tiny ones.

I took a break, ate lunch and when I came back to it, I realized the drawing was over.

A bit of shading, and I was done.

Sometimes, you just have to go with the flow.